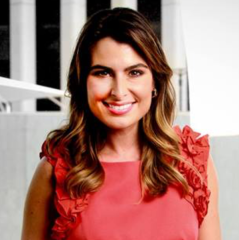 As director for diversity initiatives and community engagement, Vanessa Ruiz leads the Walter Cronkite School of Journalism and Mass Communication's strategy and tactical planning for recruiting and retaining diverse faculty, staff and students, as well as first-generation college students. She also serves as the lead instructor for the ethics and diversity courses, works with our student clubs and organizations to ensure they are diverse and inclusive and designs ongoing professional development and leadership pathways for faculty and faculty associates in diversity, equity and inclusion.

As an Emmy award-winning broadcast journalist, Vanessa also teaches on-air skills to Cronkite News students, preparing them for professional success while leading the charge on changing industry standards relevant to what journalists should look and sound like on air. Prior to joining the Cronkite School in 2017, Ruiz was the main evening news anchor at KPNX, the NBC affiliate in Phoenix.

Ruiz began her career in early 2001 as an assignment desk editor and later as associate producer for Telemundo Network’s national newscast. Just a few months into the profession, Sept. 11 occurred, catapulting Ruiz onto a career in broadcasting that continues to this day. There, she became Telemundo International’s youngest news anchor, bringing national and international news stories to the homes of 5 million-plus U.S. and Latin American viewers in English & Spanish. Her interviews have ranged from Israeli Prime Minister Benjamin Netanyahu to the presidents of Peru, Ecuador and El Salvador.

From 2005 to 2011, she accepted the challenge of being a reporter for WSVN-FOX Miami, one of the most dynamic and innovative television news stations in the country. Ruiz covered a wide range of stories, from the aftermath of the devastating earthquake in Haiti, several hurricanes, the BP Oil Spill and Super Bowl XLI, among others. She was then recruited by the U.S. Global Agency for Media to anchor and report on issues impacting Cuba, the Caribbean and South America. While at the Office of Cuban Broadcasting, Ruiz covered stories as a correspondent in Venezuela and Nicaragua, while field anchoring both U.S. political conventions in 2012 and President Barack Obama’s second inauguration in 2013.

In 2014, Ruiz signed on with KNBC in Los Angeles, covering one of the largest news markets in the country, spanning 41,000 square miles. There, she reported on a wide spectrum of stories working at the station’s flagship morning show, “Today in L.A.”

With Phoenix's KPNX in 2015, Ruiz anchored Pope Francis’ historic visit to the United States from Philadelphia and in the summer of 2016, Ruiz was the station’s choice to represent the station during the Summer Olympic Games in Rio de Janeiro, Brazil. There, she provided live, original and exclusive uninterrupted coverage across multiple platforms. In the same year, Ruiz was part of KPNX’s main anchor team for Decision 2016, NBC’s presidential election coverage. During an election cycle like no other, viewers turned to Ruiz's experience, objectivity and steadiness to provide unbiased, up-to-the-minute information during an unforgettable moment in U.S. history.

In 2016 and 2017, Ruiz’s team won the Rocky Mountain Emmy for Best Evening Newscast and in 2020, she was among the Phoenix Business Journal’s “40 Under 40” selected class, highlighting the top business and civic leaders in the Phoenix area for their career success, community involvement, leadership ability and influence.

She has also been recognized by The Academy of Television of Arts and Science for special coverage of Sept. 11, and received the David Burke Distinguished Journalism Award for exceptional integrity, bravery and originality in reporting.

Ruiz was born in Miami, Florida and is of Colombian descent. She studied part of her elementary and high-school education in Palma de Mallorca, Spain. She graduated with honors from Florida International University with a B.S. in Mass Communication, a minor in international relations and holds a Masters in Liberal Studies, with distinction, from Arizona State University.