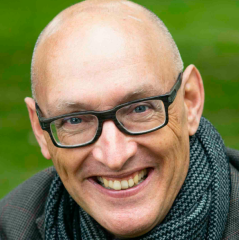 Keith Brown is the Director of the Melikian Center: Russian, Eurasian and East European Studies, and Professor in the School of Politics and Global Studies at Arizona State University. During 2021-22 he is on research leave as a Core Fellow at the Collegium for Advanced Studies at the University of Helsinki. He holds a PhD in anthropology from the University of Chicago and a BA in classics from Oxford University. His work focuses on history, culture and politics in the Western Balkans, with a particular emphasis on 20th century Macedonia. He has spent extended time in the region, and his published works include The Past in Question: Modern Macedonia and the Uncertainties of Nation (Princeton University Press, 2003) and Loyal Unto Death: Trust and Terror in Revolutionary Macedonia  (Indiana University Press, 2013).  Brown has received fellowships or grants for research and training from the Collegium for Advanced Studies at the University of Helsinki, the Defense Language and National Security Education Office, the US Russia Foundation, the US State Department Bureau of Intelligence and Research, the National Endowment for the Humanities, IREX, Fulbright, the Charles Mott Foundation, the Rockefeller Brothers Fund, the National Council on Eurasian and East European Research, the United States Institute of Peace, the University of Connecticut Humanities Institute, the Social Science Research Council and the British Academy.

Since joining ASU in 2017, Keith has extended the Melikian Center's collaborations, including strengthening university partnerships in North Macedonia, Armenia and Kazakhstan, and establishing relations with Tempe Sister Cities, Maricopa Community Colleges and the Phoenix Committee on Foreign Relations to increase awareness of the post-Soviet world and its global significance.

Keith Brown's research has focused primarily on politics, culture and identity in the Balkans, with a particular emphasis on relations between Macedonia, Greece, and Bulgaria. His solo-authored scholarly work has explored the comparative politics of history-writing (The Past in Question, 2003), and analyzed the nature of violence in the making and breaking of community (Loyal Unto Death, 2013).

He has also pursued collaboration across scholarly and professional boundaries in research on civil and military forms of international intervention, especially in the former Yugoslavia, Afghanistan and Iraq. This has produced edited volumes focused on democracy promotion (Transacting Transition, 2006) and comparative approaches to post-conflict studies (Post-Conflict Studies: An Interdisciplinary Approach, 2015; co-edited with Chip Gagnon).  He is co-director of the NEH-funded Dialogues on the Experience of War project at Brown University, 2017-2019.

Following on field, archival, and oral historical research supported by NCEEER and a Fulbright fellowship, he is currently working on a book project on environmental activism in socialist Yugoslavia, and its consequences for democratic culture in the region.