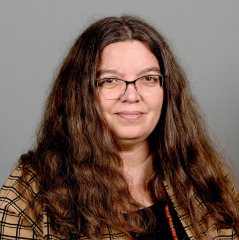 Professor Martins studies behavioral evolution by mapping the ancient history of lizard communication in the southwestern U.S. and by studying how sensory systems impact social behavior in the biomedically-important zebrafish. More generally, her research program asks about the evolution of complex behavioral phenotypes, and how evolutionary forces have interacted over long periods of time to shape phenotypic change.

Her lab pioneered the use of phylogenetic comparative methods to infer the evolutionary mechanisms underlying phenotypic evolution, and has also contributed substantively to our understanding of how different sensory systems intertwine to produce and to perceive animal communicative signals. Most recently, the Martins lab has focused on two projects: (1) multimodal communication in North American Sceloporus lizards, and (2) phenotypic plasticity and social behavior of wild zebrafish from India. In addition to lab experiments and international fieldwork, both projects involve developing new statistics, software, and data-archiving tools.

Martins joined ASU in 2017 after serving as a rotating Program Director at the National Science Foundation, Professor of Biology at Indiana University, and Associate Professor of Biology at the University of Oregon. Over the years, she has also held administrative positions including Associate Dean (twice), Director of an interdepartmental Center for the Integrative Study of Animal Behavior, and Director of several graduate and undergraduate student training programs.  Martins is a Fellow and Past-President of the Animal Behavior Society and has served as editor of Evolution, Systematic Biology, American Naturalist, and other journals. She is especially passionate about diversity, intersectionality and inclusion.