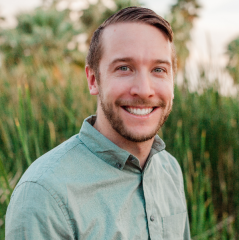 Zack German is an assistant professor in the School of Civic and Economic Thought and Leadership (SCETL). His research focuses broadly on American political and constitutional thought, along with early modern thought, on questions of statesmanship, political culture and civic character, politics and religion, civic education, and constitutional design. He has published articles in American Political Thought and The Political Science Reviewer ; essays in Lincoln and Democratic Statesmanship and Trump and Political Philosophy: Patriotism, Cosmopolitanism, and Civic Virtue ; and a book review in Political Science Quarterly. His current book project examines statesmanship, civic character, and institutional design in the thought of Montesquieu, the Federalists, and the Anti-Federalists.

German teaches discussion-based seminars on political thought, leadership, and constitutionalism, primarily in the American context. He has taught courses at ASU such as Classic Texts in Political Philosophy and Justice, Great Debates in American Politics, Lincoln: Rhetoric, Thought, Statesmanship, and Tocqueville's Democracy in America. Beyond his courses, he has directed undergraduate discussion colloquia, supported by the Institute for Humane Studies, on the thought of Abraham Lincoln, Frederick Douglass, and Alexis de Tocqueville. He is also involved with SCETL's K-12 civic education efforts, including the Civic Leadership Institute, a summer program for high-school students that has addressed, in past years, constitutional rights and liberties, Abraham Lincoln and American principles, and founding debates over the Constitution.

German was born and raised in Louisville, Kentucky. He attended Lee University in Cleveland, Tennessee, receiving his B.A. in Political Science with an emphasis on Political Theory and Law, while minoring in Philosophy and Religion. He received his M.A. and Ph.D. in Political Science from the University of Notre Dame in South Bend, Indiana, where he specialized in Constitutional Studies and Political Theory. In 2017, he moved to Arizona to become one of the founding faculty members of the School of Civic and Economic Thought and Leadership at ASU.