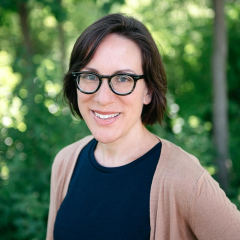 Karen Taliaferro's research interests include ancient and medieval political philosophy as well as religion and politics, with a particular emphasis on Islamic thought. Her 2019 book, "The Possibility of Religious Freedom: Early Natural Law and the Abrahamic Faiths" examined the perennial conflict of divine law and human law, proposing a re-examination of ancient and medieval traditions of natural law to mitigate the conflict.

Dr. Taliaferro's education includes a B.A. in Political Science and French from Marquette University and an M.A. and Ph.D. in Government from Georgetown University, as well as additional training in classics from Northwestern University. She has previously taught humanities and Great Books at Villanova University and has held research fellowships at the James Madison Program at Princeton University, as well as Georgetown University's School of Foreign Service in Doha, Qatar. Taliaferro was awarded a 2011 NSEP/Boren grant for Arabic studies and research on human rights curriculum in Morocco. Prior to her academic career, she served as a Peace Corps Volunteer from 2006-2008 in rural Morocco, focusing on health education and development training.