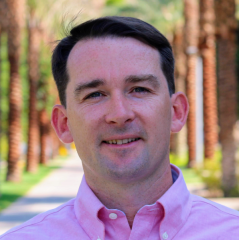 Henry Thomson is an assistant professor of political science at Arizona State University. His research focuses on the political economy of authoritarianism and democratization. He has a special interest in the role that agriculture plays in processes of development and democratization. He has published a book and articles on variation in agricultural policy across political regime type and the role of landholding inequality in promoting civil conflict and authoritarian repression. He is also interested in collective mobilization and repression under authoritarian regimes, and is currently working on a comparative project comparing the size and activities of secret police agencies across communist East and Central Europe from 1945-1989.

From 2014-2017, he was a Postdoctoral Prize Research Fellow at Nuffield College, Oxford; has been a DAAD Fellow in Berlin; a Visiting Fellow at Australian National University; and a Visiting Fellow at the Mercatus Center in Arlington, VA. His doctoral dissertation won the 2015 Juan Linz Prize for the Best Dissertation in the Comparative Study of Democratization from the American Political Science Association and his 2016 article on landholding inequality and civil conflict won the Best Paper in International Relations Award from the Midwest Political Science Association. He teaches classes in Comparative Politics, Political Economy and International Relations.

2021. "Lord, Peasant... and Tractor? Agricultural Mechanization, Moore's Thesis and the Emergence of Democracy" (with David Samuels) in Perspectives on Politics. Forthcoming.

2017. “Repression, Redistribution and the Problem of Authoritarian Control: Responses to the 17 June Uprising in Socialist East Germany.” In East European Politics & Societies 31(1): 68-92.