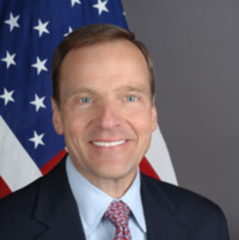 Ambassador Robert Bradtke has more than forty years of experience in dealing with foreign policy and national security issues, including in a series of senior positions in the State Department and on the National Security Council. A career Foreign Service Officer, Mr. Bradtke joined the State Department in 1973. His first assignments were Georgetown, Guyana and Zagreb, Ugoslavia. Returning to Washington in 1978, he served in the Office of Eastern European Affairs and as an American Political Science Association Fellow in the offices of Senator Charles Mathias and then Congressman Dick Cheney. In 1983, he was posted to Moscow and then Bonn. From 1990 to 1994, Mr. Bradtke worked in the Department of State’s Bureau of Legislative Affairs, becoming Deputy Assistant Secretary and Acting Assistant Secretary. In August 1994, Secretary of State Warren Christopher selected Mr. Bradtke as his Executive Assistant. He served in that capacity for two years before taking an assignment as Deputy Chief of Mission at the American Embassy in London. In July 1999, President Clinton appointed Mr. Bradtke as Executive Secretary of the National Security Council. He remained in that position under President Bush, until August 2001, when he became Deputy Assistant Secretary of State for European Affairs, with responsibility for NATO and European security issues. From 2006 to 2009, he was United States Ambassador to Croatia. Following his retirement from the Foreign Service in 2009, Mr. Bradtke has continued to serve in a number of positions in the State Department including: Charge d’Affaires at the American Embassy Berlin (2009); United States Co-Chair of the OSCE Minsk Group, dealing with the Nagorno-Karabakh conflict (2009-2012); Advisor to the Assistant Secretary for Near Eastern Affairs (2013); head of the U.S. delegation to the OSCE Human Dimension Meeting (2013); Senior Advisor in the Bureau of Counterterrorism for Partner Engagement on Syria Foreign Fighters (2014-2015); and, Charge d’Affaires at the American Embassy Oslo (2015). Mr. Bradtke has three times been the recipient of the Department of State’s Superior Honor Award, and in 2001 and 2009, he received Presidential Meritorious Service Awards from President Bush and President Obama for sustained superior accomplishment in the conduct of foreign policy and public service. He has also received decorations from the governments of Lithuania, Croatia, and Bulgaria, for contributions to relations between the United States and those countries.