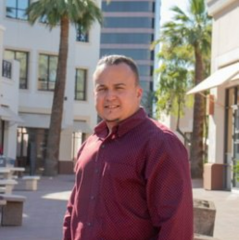 Christian Rosario has been a passionate educator who cares about students’ future. His 20 years of experience in education have helped many students be admitted to prestigious universities in Puerto Rico, the United States, and Europe.

Christian had the opportunity to be one of the first teachers in Puerto Rico to establish the first STEM Magnet School known as CIMATEC and had his first group of students graduate in 2015. He also coordinated a 21st Century Program at CIMATEC by managing the budget, coordinating classes and organizing events and field trips. The program excelled for two years based on audits made by the U.S Federal Department of Education in Puerto Rico. He then moved to Arizona to seek opportunities as an educator in Buckeye.

Once in Arizona, Christian was a teacher for Buckeye Elementary School District and was awarded Teacher of the Year in 2017. He also worked as an ADA Facilitator in 2015 and a coordinator in 2016 helping the American Dream Academy with logistics, leading meetings, evaluating facilitators and ensuring that yearly goals were met.

Currently, he works as the Assistant Director for The American Dream Academy (ADA) at Arizona State University (ASU) located at the Downtown Campus. With ASU’s Charter in mind, he has definitely engraved in his heart that ASU is a place of opportunity and that we are truly “measured not by whom we exclude, but rather by whom we include and how they succeed”.