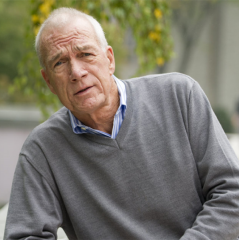 Walter V. Robinson, The Boston Globe’s Spotlight team investigations editor who led the newspaper’s Pulitzer Prize-winning report on the Roman Catholic Church sexual abuse scandal, is the inaugural Edith Kinney Gaylord Visiting Professor in Investigative Journalism at Arizona State University. As part of the new professorship, Robinson is teaching and directing multimedia investigations that will be distributed via Cronkite News, the news division of Arizona PBS.

Robinson, who serves as editor-at-large for The Boston Globe, has been teaching at the Walter Cronkite School of Journalism and Mass Communication since 2016 as the Donald W. Reynolds Visiting Professor, helping students with business and investigative reporting. In 2018, his students produced an extensive investigation that appeared in The Arizona Republic on the lasting impact of concussions on former football players with ties to the Arizona Cardinals.

With nearly four decades as a journalist at the Globe, Robinson was editor of the newspaper’s Spotlight Team, which won the 2003 Pulitzer Prize for Public Service for its comprehensive investigation into sexual abuse by Catholic priests. The investigation, which exposed a decades-long cover-up that shielded the crimes of nearly 250 priests, was made into the film “Spotlight,” which won 2015 Academy Awards for Best Picture and Best Original Screenplay.

From 2007-2014, Robinson was a distinguished professor of journalism and Northeastern University in Boston. His investigative reporting students produced 26 Page One investigative stories for The Boston Globe. He returned to the Globe in 2014 as an editor-at-large.