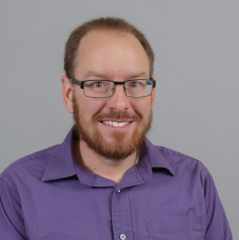 Joshua Fishlock is a mass communication and media effects researcher lecturing for the Communication program at ASU Colleges at Lake Havasu City.

Fishlock’s research is focused primarily on the emotional and moral reactions individuals have when they are exposed to violent video games. However, his area of research spans across many aspects of video game research, ranging from aggression, contextual features of games, and types of controllers used. Recently, he has begun to investigate the use of social robotic platforms in risk communication contexts. His research has appeared in The Journal of Communication, Computers in Human Behavior, as well as 21st Century Skills in partnership with the U.S. Department of Education.

Fishlock is also an established documentary filmmaker, having worked on four documentaries and was nominated for an Emmy for his work on "On The Lake: Life and Love in a Distant Place," a film about tuberculosis.