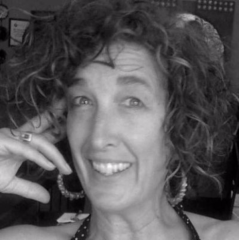 Pamela Winfrey is currently the Scientific Research Curator for two labs within Biodesign -- Carlo Maley's evolution of cancer lab and Athena Aktipis' cooperation and conflict lab. She is an emeritus at the Exploratorium in San Francisco, served as the lead curatorial consutant for the emerging artforms category at Creative Capital, and represented the United States on the interactive arts panel at Ars Electronica in Linz. She is also a playwright, screenwriter, and novelist. Her commissioned book on Andrea Palladio will be out next year, her book about Marconi has been published, she is a recipient of a Sloan grant for playwriting, and her sci/fi book, "Code Bravo", will be published in July 2020. She has curated a wide variety of exhibtions including "The Changing Face of What is Normal", Cognitive Technologies (BCI- Brain computer interface), the West Gallery ( a gallery at the Exploratorium that explores human phenomena), 2nd Skin (analog and digtial clothing) and many other performance and visual arts based exhibtions and events.  She has a BA in theater, an MA in Interdisciplinary arts, and an MFA in television and screen writing.

BA in Theater from Macalester College in St Paul Minn.

Thorny Issue: Is it Cancer?

The Beauty of Scientific Objects

I am interested in interdisciplinary artforms. I am particularly interested in the art/science continuum and find that different kinds of minds which meet to explore a common topic frequently come up with interesting ways to solve intractible problems.