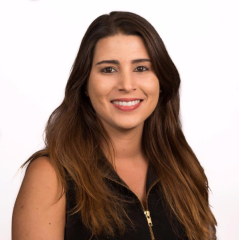 Christiane Fontinha de Alcantara is an Honors faculty fellow. Her scholarly interests center on how cultural artifacts reflect systems of inequality and injustice, while also providing models for how to fight inequalities and transform our communities. She is currently working on a book manuscript that explores the role of physical description and beauty of female literary characters. This work looks into scientific, philosophical, historical and literary scholarship to understand the relevance of describing characters’ physical characteristics in literary texts from Latin America and Europe from 1700 until today.

Dr. Alcantara has written on representations of rape and trauma in novels by Caribbean American authors Loida Maritza Pérez and Edwidge Danticat. Her work exposes the consequences of abuse as experienced by many Caribbean women in historical moments of dictatorships and in their diaspora to developed countries. She has also investigated film and TV adaptations of Shakespeare to Brazilian audiences, which resulted in the publication of “Representations of Shakespearean Women in Contemporary Brazilian Media” in the Forum for World Literature Studies. Her publication “Silences, Sexual Trauma and Healing in Corregidora and Breath, Eyes, Memory” draws several parallels between the abuse women experienced during dictatorial regimes in Haiti and the intersectionality of gender and racial abuse suffered by African-American women today. In 2019, she published "Aversão Oficial: Resumida – A New Perspective on Favelados," where she evaluates Brazilian poet Paulo Dutra's recently-published novel Aversão Oficial: Resumida. Her article offers a brief description of the text's key points with an emphasis on the explanation of cultural elements from Rio de Janeiro and from the life of an immigrant in the United States and an evaluation of the strengths and weaknesses of that work.

Besides teaching The Human Event, Dr. Alcantara teaches upper-division courses on The Politics of Beauty, on the relationship between dogs and humans, and courses on critical/radical pedagogy. Dr, Alcantara has also taught many sessions of the Internship course at Barrett, a course on Arizona House Bill 2281 and the Banned Books and the Humanities Lab.

Dr. Alcantara received her doctorate in comparative literature from Purdue University. While at Purdue, she was awarded the merit-based Lorraine K. Lawton Award in 2013, and has received honorable mention in the highly competitive Dean’s Award for Best Instructor Project and the School of Languages and Cultures Literary Award for Best Cultural Paper.