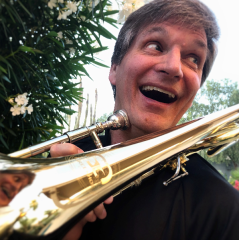 With a style that has been described as "passionate," "fiercely vigorous," and even "humorous," Brad Edwards has appeared as a soloist before audiences in the United States and Europe. His solo credits include radio and television broadcasts, premieres of new music, guest recitals at colleges and regional workshops, and concertos with student and professional orchestras and wind ensembles. He has twice been featured as a soloist with “Pershing’s Own” Army Band at the American Trombone Workshop in Washington D.C. As a member of the Air Force Concert Band he was twice featured as a soloist.

His CD, “Trombone And…” features concert duets pairing the trombone with other instruments. It includes several works written for and premiered by him as well as one of his own compositions, Five American Folksong Sketches. Of this recording, Audiophile magazine wrote, “Trombonist Brad Edwards is an accomplished musician. The performances are all excellent, and the pairings with other instruments, particularly the marimba are quite interesting.”

He is best known for his pedagogical books including, "Lip Slurs," "Lip Slur Melodies" as well as the "Trombone Craft" and "Simply Singing for Winds" series. He has published a number of pieces through the International Trombone Association Press (available from Warwick Music) including Blue Wolf which has been recorded three times and Four Impromptus for Low Bone Alone, which was selected for the national solo competition of the American Trombone Workshop.  More recently, he was commissioned by the state of South Carolina to compose all-state audition solos for all woodwinds and brass on a three-year cycle. He has extended this project into a website, AuditionSolos.com.

In addition to the Air Force Band, Edwards has held positions as Principal Trombonist of the South Carolina Philharmonic, Symphony Orchestra Augusta and the Waterloo/Cedar Falls Symphony. He has also been the bass trombonist of the Cedar Rapids Symphony and the Arlington Symphony in Virginia. He has performed with such ensembles as the Baltimore Symphony, the Kennedy Center Opera Orchestra, the brass choir of the National Symphony, Hartford Symphony, the Charleston Symphony, the Charlotte Symphony and the Baltimore Opera Orchestra as well as the Wintergreen and Cabrillo Festival Orchestras.

He has shared the stage with such diverse artists as Al Jarreau, Ray Charles, Dave Brubeck, Ben Folds, Jean-Yves Thibaudet, Olivia Newton John, Bela Fleck, the Gatlin Brothers, Robert Merrill, Big Bad Voodoo Daddy and Roger Daltry.  In 2007, he was selected to be participant at the prestigious Alessi Seminar in New Mexico.

Edwards holds degrees from the Peabody Institute of Johns Hopkins University, the Cincinnati College-Conservatory of Music and the Hartt School of Music. His primary teachers have been Jim Olin, Tony Chipurn, Ronald Borror and Henry Schmidt.  He has also studied with Joseph Alessi, Arnold Jacobs, Dave Fedderly and Milt Stevens.

The creation of better teaching materials for trombone.  Pragmatic compositions such as one-minute audition solos for high school woodwinds and brass.

Introductory Studies in Tenor and Alto Clef, "Before Blazhevich"

Lip Slurs: Exercises for the Development of Tone and Technique

Simply Singing: A Wellspring of Melodies

Patterns and Snippets: A Musical Approach to Scales and Arpeggios