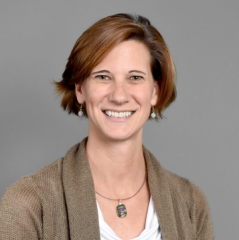 Anne Kotleba is an artist and educator with a passion for building a more just world. She is the campus director for the Nonprofit Leadership Alliance and lecturer in the School of Community Resources and Development at Arizona State University.

In the aftermath of Hurricane Katrina, Kotleba worked with the Ohr-O’Keefe Museum of Art in Biloxi, Mississippi, to help residents celebrate the rich history that is culturally and emotionally important for rebuilding homes and lives.  Kotleba also served for three years as the resident artist at the Harrison County Juvenile Detention Center and the Gulf Coast Adolescent Offenders Program.

In 2010,  Kotleba collaborated with a fellow community artist and eight young people to co-found the Baltimore United Viewfinders, youth arts and leadership organization utilizing digital media as a powerful tool for community action and income. Kotleba was awarded the prestigious Community Fellowship from the Open Society Institute for her work with the Viewfinders. She was the executive director until 2016.

Kotleba has organized and facilitated projects locally and abroad, including Baku, Azerbaijan and Jakmel, Haiti. She was a co-chair for the five-year campaign to revitalize the Tench Tilghman School and Community Playground in Baltimore. Kotleba is a proud AmeriCorps alum, former Colorado State Park Ranger and youth basketball coach.

Kotleba graduated from Augustana College in Rock Island, Illinois with degrees in Studio Art and Political Science. She received an MA and an MFA in Community Arts from the Maryland Institute College of Art in Baltimore. Currently, she is pursuing a Master of Legal Studies from the James E. Rogers College of Law at the University of Arizona.