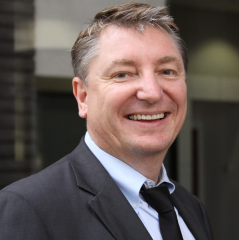 Denis Leclerc teaches cross-cultural communication and global negotiations at Thunderbird School of Global Management. His interests and research have focused on intercultural communication competence and global negotiation. He teaches in multiple programs such as on-campus MBA, Executive MBA, customized programs such as Thunderbird International Consortia, and multiple oil and gas executive programs. He also serves as the academic director for multiple custom programs such as Raytheon, Novartis and Medtronic, and open-enrollment programs such as Communicating and Negotiating with a Global Mindset and Leading Teams for Strategic Results. Before joining Thunderbird, Leclerc taught at Arizona State University and served for eight years as director of multiple international studies abroad programs there. He directed and served on numerous master’s and doctoral degree committees in the U.S. and Europe. He was co-program evaluator for a National Science Foundation three-year grant examining the cultural adaptation of U.S. scientists working in scientific laboratories abroad. This research project was instrumental in guiding the foundation to redesign program components to include cross-cultural training for their international assignments.

Leclerc has been published in leading journals in his field including the International Journal of Intercultural Relations, and has been a contributor to Readers in Communication, authoring a chapter on the impact of culture on global negotiations.

He is also an active and highly sought-after consultant. As the principal of his own consulting company, he has conducted cross-cultural research for companies in North America and France. Additionally, he has provided support for international program evaluations and has planned, facilitated, and analyzed professional-development seminars for a wide range of executive programs throughout the U.S. and Europe. He is a keynote speaker and seminar leader for various companies such as American Express, U.S. Chamber of Commerce, and ExxonMobil on topics as varied as cultural misunderstanding, improving multi-cultural awareness, and cultural strategic negotiation preparation.

A native of Normandy, France, Leclerc completed a maitrise in cultural geography (honors) from L’Universite de Haute Normandie, Rouen, France, and then a master’s in international tourism at Arizona State University. He received his doctorate in crosscultural communication from the Hugh Downs School of Communication at Arizona State University. He received his certifications for the Global Mindset Inventory from Thunderbird and the COM/COI from the Training Management Corporation.