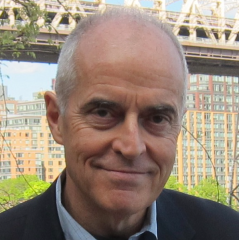 Andrew writes about the future of local TV journalism as a Senior Research Professor at the Walter Cronkite School of Journalism at Arizona State University, part of a Knight Foundation-funded project designed to drive innovation in local television news. He oversees the project’s digital hub at www.cronkitenewslab.com.

Andrew is also a senior advisor to the new Center for Constructive Communication at MIT. Prior to that, Andrew was a Visiting Scholar at the Laboratory for Social Machines, a research group at the MIT Media Lab working at the intersection of technology and journalism.

Andrew was President, CBS News, from January 1996-November 2005. Before that, he was executive producer of The CBS Evening News. Andrew was also responsible for developing and launching 48 Hours, the primetime CBS News hour that premiered in January 1988. He began his career working in local news at WNEW-TV and WCBS-TV in New York.