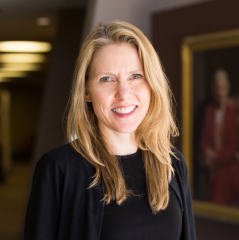 Julia Fromholz serves as director of the Rule of Law and Governance Program at Arizona State University Sandra Day O’Connor College of Law and is based in Washington, DC. Before joining ASU Law, Ms. Fromholz worked at the U.S. Department of State, in both Pakistan and Washington. She spent two years as the senior director, Rule of Law at the U.S. Embassy in Islamabad, and in Washington advised the Under Secretary of State for Civilian Security, Democracy, and Human Rights on a range of issues, including mass atrocity prevention and human trafficking.

Prior to joining the State Department, Professor Fromholz worked at Human Rights First’s Washington office, where she directed the Crimes Against Humanity program and worked with the Human Rights Defenders program. Professor Fromholz had previously lived in Phnom Penh, Cambodia, where she worked with local human rights organizations, focusing on monitoring and reform of the criminal justice system. She clerked for Judge William Fletcher on the U.S. Court of Appeals for the Ninth Circuit and practiced law at Keker & Van Nest in San Francisco; before going to law school, she worked at the Boston Consulting Group. Professor Fromholz graduated magna cum laude from Harvard College, where she was captain of the softball team and wrote her senior thesis on California water policy. She earned her J.D. from the University of California, Berkeley School of Law (Boalt Hall), where she served as editor in chief of the California Law Review. She speaks French and was a French-American Foundation Young Leader in 2011 and 2012.