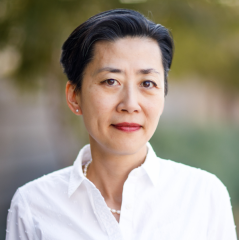 Previously, Ji Mi served in various fast-paced and evolving roles at New York University: early in her career at the Interactive Telecommunications Program at the Tisch School of the Arts before new media was new media; later at the Polytechnic University (now the Tandon School of Engineering at NYU), first serving as vice president for strategic initiatives and chief of staff to the president, then later serving as the senior director of integration, leading the merger between the two institutions; and subsequently serving as the assistant vice president for global programs planning. Ji Mi has also served at the world-renowned Earth Institute at Columbia University, ultimately as chief of staff and assistant deputy director.

A long-time New Yorker by way of Seoul and an avid internationalist, Ji Mi has served in a leadership role for the United Nations Development Programme and in various capacities for numerous start-up organizations, both not-for-profit and for-profit (helping take a company public in the days of the dot-com boom), and has been involved in political campaigns.

Ji Mi serves on the boards of the StartupAZ Foundation, the Co+Hoots Foundation and numerous local and national advisory councils and committees for entrepreneur-supporting organizations and programs. She is a regular advocate and national speaker on inclusive entrepreneurship.

Since November 2015, Ji Mi Choi serves or has served as PI or co-PI on more than 30 grant- or gift-funded programs, projects, and initiatives awarded over $58M in external funding.