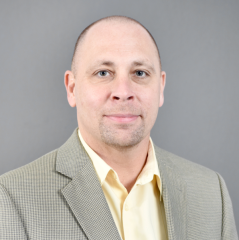 Dr. William Terrill is Associate Dean in the Watts College of Public Service and Community Solutions, and Professor in the School of Criminology and Criminal Justice, at Arizona State University. He earned his Bachelor degree from Penn State and his Master and Ph.D. degrees from Rutgers University. Professor Terrill’s early experience as a Military Police Officer translated to an interest in policing from both a practitioner and academic perspective. Over the past 25 years, he has worked with local, state, and federal law enforcement agencies, directed numerous research studies, served as a consultant on a multitude of projects, and been retained as an expert witness.

Dr. Terrill has published widely within the criminal justice field and has written two books on police use of force and culture. He is formerly the Chairperson for the American Society of Criminology Division of Policing and served on the Sub-Committee to President Barack Obama’s 2015 Task Force on 21st Century Policing.  Professor Terrill is currently conducting a study on officer perceptions of firearm danger with the Phoenix, Arizona Police Department, as well as a study with the Federal Law Enforcement Training Centers (FLETC) examining body-worn cameras in several police agencies to help identify escalation and de-escalation in relation to use of force. Dr. Terrill also currently serves as Co-Editor for Policing: A Journal of Policy and Practice published by Oxford University Press.

Terrill, William, Eugene A. Paoline III, and Jason R. Ingram (forthcoming). “Beyond the Final Report: A Research Note on the Assessing Police Use of Force Policy and Outcomes Project.” Policing: An International Journal.

Terrill, William (forthcoming). “The Importance of Organizational Use of Force Policy." Police Science: The Australia & New Zealand Journal of Evidence Based Policing.”

Paoline, Eugene A. III, Jacinta M. Gau, and William Terrill (2016). “Race and the Police Use of Force Encounter in the United States.” British Journal of Criminology. doi:10.1093/bjc/azw089