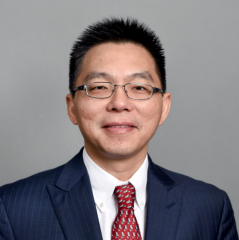 Junshan Zhang is the Ira A. Fulton Chair Professor in the School of Electrical, Computer and Energy Engineering. He joined the Arizona State University faculty as an assistant professor in August 2000. He received a bachelor's degree in electrical engineering from HUST, China, in July 1993; a master's degree in mathematical statistics from the University of Georgia in December 1996; and a doctorate in electrical engineering from Purdue University in 2000.

Zhang is the recipient of a 2003 National Science Foundation (NSF) CAREER Award and a 2005 Office of Naval Research YIP award. He won the 2003 Faculty Research Award from the IEEE Phoenix Section. He was chair of the IEEE Communications and Signal Processing Phoenix Chapter from 2001 to 2003. He has been on the technical program committees of INFOCOM, GLOBECOM, ICC, MOBIHOC and SPIE ITCOM. He served as an associate editor for IEEE Transactions on Wireless Communications during 2004 to 2008.