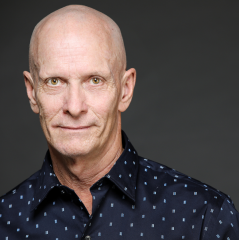 He is an award-winning actor, director and fight choreographer with more than 170 shows choreographed. Also an accomplished mime, his work has been featured in numerous publications including From The Greek Mimes To Marcel Marceau And Beyond, Mime Journal, Shanghai Theatre Magazine and Phoenix Magazine. His credits include national and international tours, Broadway, Off-Broadway, regional theatre, international festivals and TV.

He's conducted master classes, workshops and residencies at universities, conservatories and public schools throughout the country and in China, Greece, England, Ireland and Germany. He taught at the University of California at Santa Barbara, Douglass College and Scottsdale and Mesa Community Colleges. At ASU, he teaches graduate and undergraduate classes in movement and acting. He is the author of Connected Motion: A Common Sense Approach To Movement Training For Actors.

He and his wife live in Tempe, Arizona and they have four children and five grandchildren. Through his work he intends to glorify God, from whom all good things come.