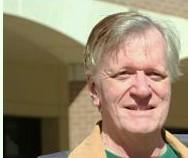 In addition, I’ve held held two Fulbrights. The first was in Denmark, and the second was in Sweden. I also received an NEH grant to attend the Institute on Realism at the University of California at Berkeley.

My hobby is collecting guitars, banjos, mandolins, and stray dogs. In addition, I recently took up edible landscaping and festooned my yard with forty-four fruit and nut trees.