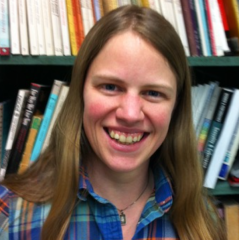 Kristin Hunt is an associate professor of theatre in the School of Music, Dance and Theatre. She earned her master's and doctoral degrees in theatre research at the University of Wisconsin-Madison. As an interdisciplinary theatre researcher/practitioner, her research interests include the adaptation of ancient and classical performance modes in contemporary contexts, performance as activism, food in/as performance, and performance-based pedagogy. Her pedagogical practice focuses on applied theatre, theatre in education, theatre for social justice, and experimental performance. Her monograph, Alimentary Performances: Mimesis, Theatricality, and Cuisine, was published by Routledge in 2018. Her co-authored book, Drama and Education: Performance Methodologies for Teaching and Learning, was published by Routledge in 2015 and translated for Chinese readers in 2019. Her articles have appeared in Performance Research, Youth Theatre Journal, Theatre Topics, and Restoration and Eighteenth Century Theatre Research, and multiple anthologies. Her current scholarly and artistic practice explores mimesis in cuisine, and includes the adaptation of classical works into culinary events. Her current book project is Gut Knowledges: Culinary Performance and Activism in the Post-Truth Era. She is also currently preparing an edited collection on food and performance, Performing the Edible: Sustenance, Sensation, and Sustainability, with collaborator Dr. Joshua Abrams.

Dr. Hunt is also a translator, designer, and director of theatre. Her translations and adaptations of Georg Buchner’s Woyzeck and August Strindberg’s Miss Julie, originally produced in Madison, WI and Chicago, IL, were featured at the 2015 Prague Quadrennial of Performance Design and Space’s Makers session focused on food and performance. As a food designer and scenic designer, she has created menus and spaces for Saint Lawrence University's Everyman and The Bacchae. She directed an edible production of Titus Andronicus on the Film, Dance and Theatre Mainstage in 2015 as well as an adaptation of Ajax in 2018.