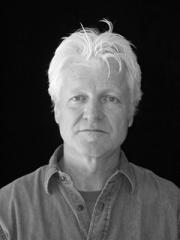 Daniel Collins joined the School of Art faculty at Arizona State University in 1989. In addition to teaching courses in intermedia and foundations, Professor Collins is founding co-director of the PRISM lab, an interdisciplinary 3D modeling and rapid prototyping facility, and coordinator of the foundation program in basic art instruction (artCore). He is also a senior sustainability scholar in the Julie Ann Wrigley Global Institute of Sustainability.

Collins was awarded a Fulbright to Malaysia for research and teaching in 1987 and the Herberger College Award for Research and Creative Activity in 2000, 2007, 2010, and 2013. He received the Evelyn Smith Research Award from the School of Art in 2018. He is currently funded by the EPA to develop environmental education curricula for high schools in the Intermountain West. A project focused on "stories of place" with Arizona high schools was recently funded through AZ Humanities.

Collins is currently president of the Telluride Institute, an organization devoted to watershed education and cultural sustainability.

His theoretical essays and reviews in the areas of art, education, and technology have appeared in Leonardo, New Art Examiner, Computer Graphics, and the Journal of Social Theory in Art Education among others. He has co-edited two collections of essays on contemporary art: "The Simulated Presence" (1993) and "The Eighth Day: The Transgenic Art of Eduardo Kac" (2003), both of which were published by the Institute for Studies in the Arts at ASU.  He recently completed a chapter on PGIS strategies for the Handbook of Visual Research (Sage Publications).  His work is featured in a book by Bruce Wands entitled, "Art in the Digital Age" (Thames and Hudson).

Collins's work in digital sculpture and installation has been exhibited at the Boston Cyberarts Festival, the Basel Art Fair, The Center for the Future, Slavonice, Czech, SIGGRAPH, Scottsdale Center for the Arts, the Phoenix Art Museum, the Tucson Museum of Art and in numerous one person shows in commercial galleries and public museums in Arizona, New York., and China (Urumqi and Beijing).  He is currently working on a series of large scale "incident maps" of communities across the Southwest United States.

A full list of Collins' projects can be found here.