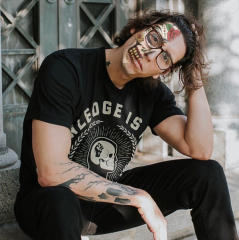 Dr. Sandoval grabbed his BA in English with a focus on Performance at the University of Nevada Las Vegas, and his MA in Individualized Study with a focus on Performance Studies from NYU. He copped his PhD in Culture & Performance from UCLA, where his research analyzed the hunger strikes and suicides staged by detainees held at the US military detention facility at Guantanamo Bay, Cuba. In addition to his work as an Honors Faculty Fellow at Barrett, Dr. Sandoval is also an Affiliate Faculty with ASU’s Center for the Study of Race & Democracy.

In conjunction with teaching The Human Event, Dr. Sandoval teaches a variety of upper-division seminars. These have included: Race and Performance, Cultural Theory and Pop Culture, Disney Films, Radical Activism in Theory and Practice, 21st Century Documentary Film, and Urban Poverty, Race, and Art.  He also directed the New York City summer travel program Culture and Performance in the Global City, and will be directing Barrett’s 2020 Summer Abroad program in Peru.

Dr. Sandoval is currently researching the transborder holiday Dia de los Muertos (or Day of the Dead).  He focuses on the large-scale public celebrations of this holiday in Los Angeles and the US Southwest in order to examine the ways the holiday has developed from ancient MesoAmerican ritual to American popular culture. His research analyzes issues of performance, interculturalism, race, hybridity, indigeneity, spirituality, and cultural commodification.  Furthermore, he writes about the way Day of the Dead intersects with his experiences coming of age as a working-class mixed-race Chicano.

In addition to his scholarly pursuits, Mathew has also enjoyed a career in the arts.  He toured internationally with choreographer Louis Kavouras. He is a certified teacher of the “Expressive Actor” technique, working under the tutelage of master teacher Michael Lugering.  In New York City Mathew worked as a performer, writer, and director with various experimental theatre companies and choreographers, before founding his own performance company – First Function.  He was as an art and performance critic for The Brooklyn Rail and Downtown Express.  He also served as an education and curatorial assistant for Performa, New York’s premiere arts organization dedicated to live performance.  In Los Angeles he performed and toured with choreographer Maria Gillespie’s Oni Dance ensemble.  He was also featured in the 2013 independent film Down and Dangerous by Sabi.  Mathew recently served as the Associate Artistic Director for Kristina Wong’s audience-immersive performance Discharges from American History staged in New York’s historic Washington Square Hotel, which featured ASU Barrett students making their New York theatre debut as historical re-enactors.  Currently Mathew hosts the Race & Revolution film series at FilmBar, Phoenix’s independent arthouse cinema.