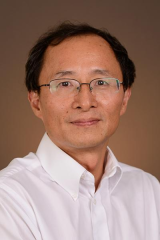 Shuguang Deng is a professor in the School for Engineering of Matter, Transport and Energy. He joined the chemical engineering faculty at Arizona State University in August 2015. He has had a wide experience both as an research and development engineer and in academia. Prior to joining ASU, Deng was the Distinguished Bob Davis Professor at New Mexico State University (NMSU).

Professor Deng's research interests include adsorbents, catalysts and membranes for sustainable energy and clean water applications. He received his doctorate from University of Cincinnati in 1996, and worked as a lead research engineer in The BOC Group in New Jersey before joining NMSU in 2003. He became an associate professor in 2006 and professor in 2009. Deng was a research and development manager in Nanjing Refinery, SINOPEC, China before coming to America in 1992 to pursue his doctorate in chemical engineering.