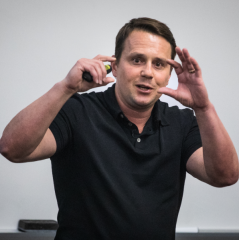 Associate Professor Dustin Pardini is with the School of Criminology and Criminal Justice at Arizona State University. Pardini’s research focuses on the precursors and outcomes associated with the development of antisocial (e.g., violence, theft) and substance using behaviors from childhood to adulthood, as well as evaluating the impact that early psychosocial interventions can have on these problems. Much of this work has focused on a particularly violent and recalcitrant subgroup of antisocial youth and adults who exhibit callous-unemotional traits (e.g. lack of guilt, remorse, empathy), which are consistent with the affective features of psychopathy. His research in this area influenced the adoption of callous-unemotional traits as a subtyping scheme for conduct disorder (called “limited prosocial emotions”) in the 5th edition of the "Diagnostic and Statistical Manual of Mental Disorders" and the upcoming 11th revision of the "International Classification of Diseases." It has also led to the development of novel evidence-based interventions designed to effectively intervene with youth exhibiting high levels of callous-unemotional traits.

In 2018, Pardini was the principal administrator of the biennial study, the Arizona Youth Survey, put on by the Arizona Criminal Justice Commission and conducted by ASU's School of Criminology and Criminal Justice, assessing substance use, gang involvement, bullying, violence, texting while driving and other risky behaviors among eighth, 10th and 12th-graders from all 15 counties in the state of Arizona. His research team helped design the survey, collected and cleaned the data and generated the school-level reports.