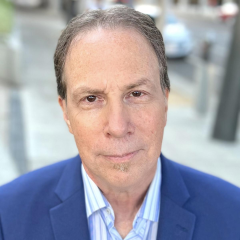 Steven Beschloss is an award-winning writer, editor, journalist, filmmaker and content strategist. He is a Professor of Practice with a joint appointment from the College of Global Futures, the College of Liberal Arts and Sciences, and the Walter Cronkite School of Journalism and Mass Communication. He is the Founding Director of the Narrative Storytelling Initiative across the university, leads the Narratives focus of the Julie Ann Wrigley Global Futures Laboratory, and is a Senior Global Futures  Scholar.

His articles and essays on economics and politics, urban and international affairs, art, culture, science and education--from the U.S. and Europe--have been published by The New Yorker, The New York Times, The Washington Post, The New Republic, Smithsonian, The Economist/Economist Intelligence Unit, National Geographic and dozens of other print and online outlets. He has been nominated for a Pulitzer Prize, selected Journalist of the Year in Virginia and honored for his magazine writing by the American Society of Journalists and Authors. Beschloss also serves as the founding editor of Transformations, an online magazine of essays and a publishing channel of the Los Angeles Review of Books, and writes and publishes America, America, focused on politics, society, democracy and justice.

In addition to authoring two recent books ("Adrift: Charting Our Course Back to a Great Nation" with co-author William Harris and "The Gunman and His Mother: Lee Harvey Oswald, Marguerite Oswald, and The Making of an Assassin"), Beschloss has served as a managing director of a Los Angeles-based media relations firm, executive managing editor of a Phoenix-based custom publisher, and co-director of a Finland-based film and TV company. His fiction and non-fiction film work (from Finland, France, Russia and the U.S.) has been translated into more than a dozen languages and seen and sold in nearly two dozen countries.

A Chicago native and married father of two daughters, he is a graduate of Haverford College in Sociology and the master's degree program of Northwestern University's Medill School of Journalism. He also studied for one year in the graduate program in economic history at the London School of Economics. His personal website is www.stevenbeschloss.com.

Among his recent work: "Scholars Need to Act with Greater Urgency," published by Times Higher Education and republished by ASU's Global Futures Laboratory, and "A Little Civility Can Be a Dangerous Thing,"  published by the Washington Post.