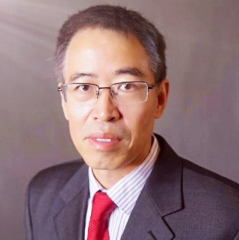 Zhaoyang (Frank) Fan is a professor in School of Electrical, Computer and Energy Engineering (ECEE) of Arizona State University. Fan earned his doctoral degree from Northwestern University in 2001. He received his bachelor’s and master’s degree from Tsinghua University of China in 1991 and 1994, respectively. He was an assistant, associate, and then full professor at Texas Tech University from 2008 to 2020 conducting research on semiconductor materials and devices. Before that, he worked in a startup pioneering in the world the development of III-nitride wide bandgap semiconductor micro-LED based displays, the next-generation display technology. He also engaged in research on AlGaN high electron mobility transistors for power electronics. He has been the author or co-author of more than 120 technical papers, and a dozen of patents. His current research is in the areas of semiconductors and phase-change materials for electronics and photonics such as neuromorphic devices and tunable photonic devices; nanomaterials for electrochemical energy storages including electrochemical capacitors and batteries.

Ph.D. positions in Electrical Engineering or in Material Science are available. If you are interested in electronic materials/devices, nanomaterials, electrochemical energy storage (batteries), please contact me.