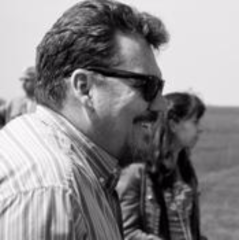 Joseph P. Foy earned his bachelor’s degree in physics at the University of Alabama in Huntsville, where he conducted research in space and solar physics at NASA’s Marshall Space Flight Center. He earned his doctorate in physics and astronomy at Arizona State University studying and modeling the dynamics of the Crab Nebula supernova remnant. His research focuses on understanding the physics of pulsar wind nebulae and of the interstellar medium.

Dr. Foy is co-author of the undergraduate physics textbook "Introduction to Classical Electrodynamics," which was published by Maricourt Academic Press in 2019.

He joined the faculty at Barrett, the Honors College in the fall of 2008, following a visiting professorship at Hampden-Sydney College in Virginia.

Image of Dr. Foy with students at Stonehenge during the 2012 summer travel abroad program.