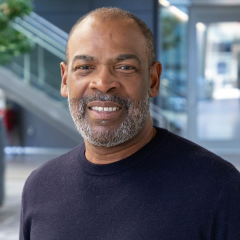 Don Gibson has more than 30 years of experience as an attorney, business executive and entrepreneur in the sports and entertainment industries. He has represented entertainers, athletes and companies in business and in legal matters, and has spent more than 20 years in senior leadership positions with major sports organizations.

After four and a half years with the Basketball Hall of Fame, he left to pursue entrepreneurial interests in Los Angeles. He formed his own sports management agency, XL Sports, and then became a principal and co-founder of Section 1, a sports and entertainment consumer products company. He subsequently returned to private law practice, joining the law firm Dreier Stein Kahan LLP based in Santa Monica, California as a partner, heading up the firm’s new sports law practice. He also simultaneously launched and became Chief Operating Officer of Dreier Sports Opportunities, which provided sports marketing and business development services to athletes and businesses.

In 2009, Professor Gibson launched Kavi Sports & Entertainment, a consulting firm that provides a broad range of services to clients in the sports and entertainment industries, including strategic planning, licensing, branding and business development. In 2014, he co-founded and launched Brandtheon, which provides brand development and brand management services to sports and entertainment personalities. Since 2015, he has been a Professor of Practice with the Arizona State University, Sandra Day O’Connor College of Law, teaching courses in sports law and business.

At UCLA, he was a member and Chief Comments Editor of the Law Review. Following law school, he was Law Clerk to United States District Court Judge David W. Williams in the Central District of California, and a teaching fellow at Stanford Law School where he taught Legal Research and Writing to First-Year students.