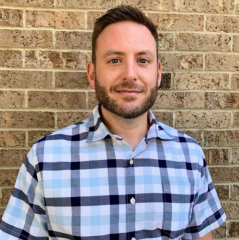 Adam Rigoni is a product of the University of Michigan-Ann Arbor. He earned his bachelor's with highest distinction and high honors in philosophy and political science and went on to earn his J.D. and doctorate in philosophy. His research interests include legal philosophy, legal reasoning, logic, semantics, contract law, and restitution.

Professor Rigoni’s work has been published in Legal Theory, Artificial Intelligence & Law, The Washington & Lee Law Review, and The Journal of Philosophical Logic. His current project focuses on the morality of breach of contract.

In his spare time, Rigoni is an avid sports fan, a connoisseur of professional wrestling, and a reader of Batman comics. Most of all, he enjoys spending time with his dog, Haley.