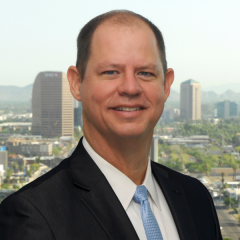 Director of Strategic Marketing and Communications

Craig Smith brings more than 20 years of marketing and communications experience to the Ira A. Fulton Schools of Engineering. He is responsible for the messaging and promotion of the largest academic research engineering program in the United States.

This position is Mr. Smith’s third stint at Arizona State University as he holds a Master of Business Administration degree in marketing from Arizona State University’s W. P. Carey School of Business, where he went on to serve as their director of marketing and communications years later. During his tenure at the W. P. Carey School of Business, Mr. Smith managed successful marketing and public relations programs for high-profile events, including a $50 million school naming gift, the introduction of an MBA program in Shanghai and a Nobel Memorial Prize in Economic Sciences.

Prior to joining Arizona State University most recently, Mr. Smith was the managing director of corporate communications for Best Western Hotels & Resorts, the world’s largest hotel chain, for nearly a decade. He led the brand’s communication efforts from one to seven hotel brands and its first logo rebranding in 22 years. He also oversaw the strategic execution of Best Western’s public relations program, as well as a communications program targeting the owners and employees of the more than 2,100 Best Western hotels in North America. These efforts led to Mr. Smith being named a Top 25 Most Extraordinary Mind by the Hospitality Sales & Marketing Association International in 2012.

Mr. Smith also served as chairman of the American Hotel & Lodging Association’s communication and marketing industry committees. Earlier in his career, he was an executive communications manager for Sabre, a global travel technology company, where he helped guide marketing and communications of the company’s spin-off from American Airlines.

He received his Bachelor of Arts in political science from the University of California, San Diego.