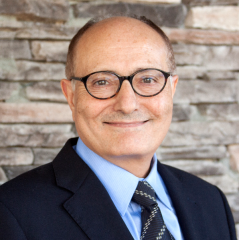 Multiple award-winning executive educator and author whose teaching and research interests span the globe, Dr. Mansour Javidan received his MBA and Ph.D. degrees from the Carlson School at the University of Minnesota. He is the Garvin Distinguished Professor and Director of Najafi Global Mindset Institute (www.globalmindset.com) at Thunderbird School of Global Management at Arizona State University.

Mansour is the Past President and Chairman of the Board of Directors of the world-renowned research project on national culture and leadership, titled GLOBE (Global Leadership and Organizational Behavior Effectiveness). He is a coeditor of the 2004 GLOBE book, which won the Society for Industrial and Organizational Psychology’s (SIOP) "M. Scott Myers Award for Applied Research in The Workplace”. He is also a coauthor of the latest GLBOE book, published in August, 2014 which received the 2015 University of San Diego and International Leadership Association (ILA) leadership book award for "Scholarly Rigor and Critical Thought.” Mansour’s article on global leadership recently received the Decade’s Best Paper Award (2006- 2016) by the Academy of Management Perspectives. Dr. Javidan was recently recognized as among the top 100 most influential (i.e., top 0.6%) authors in Organization Behavior in the world. He is currently the project director of GLOBE 2020, a research program focused on culture change and trust dynamics in 100 countries. The project has received close to $1.5 million in funding.

The World Bank and the United Nations development Program have designated Dr. Javidan an expert advisor on Global Leadership. NASA (National Aeronautics and Space Administration) has designated him an expert on managing diversity, and the U.S. Army has designated him a Senior Research Fellow. He recently stepped down as the Vice Chair of the Board of Directors of the International Leadership Association (http://www.ila-net.org/). He has designed and taught executive development courses and workshops, conducted consulting projects, and made presentations in 30 countries. His list of clients includes NASA, Abbott Labs, Accenture, Aditya Birla, Alstom, Statoil, BAE Systems, Bank Mandiri, BP, Cisco, Coachlear, Chevron, Commerzbank, Dell Computers, Europharma, MAGNA, Merck, Dow Chemical, Huawai, and Novartis.

A proven academic, Dr. Javidan took a four-year sabbatical from his university teachings to work with the CEO of TransCanada PipeLines, a multi-billion dollar energy company. Dr. Javidan was instrumental in helping the CEO develop new directions and strategies, and facilitate cultural

change within the company and its pipeline business. He was directly involved in the acquisition of a $15 billion corporation, at the time the largest such merger in Canada. The merger resulted in the formation of the fourth largest energy services company in the world. He established a process for new business development that involved over 200 employees throughout the company and produced new business ideas estimated to produce $50 million in net after tax earnings.

Dr. Javidan is the Past Senior Editor, Global Leadership, for the Journal of World Business. He also served a three-year term on the editorial board of the Academy of Management Executive. He was elected a Fellow of the Pan Pacific Business Association and was named in Lexington’s Millennium Edition of the North American Who’s Who Registry and Empire’s 2019 Who’s Who Registry.