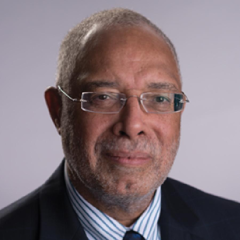 Professor Emeritus Myles V. Lynk was the first Peter Kiewit Foundation Professor of Law and the Legal Profession at the Sandra Day O’Connor of Law, specializing in legal ethics, business organizations and civil procedure. Professor Lynk came to ASU in 2000 as a Visiting Scholar from Practice. Prior to coming to ASU he was a partner in the Washington, DC, office of a large national law firm, served on the White House Domestic Policy Staff in the Carter Administration and was a law clerk to Judge Damon J. Keith of the U.S. Court of Appeals for the Sixth Circuit. A past President of the District of Columbia Bar, Professor Lynk now serves as the Senior Assistant Disciplinary Counsel for appellate litigation in the District of Columbia Courts’ Office of Disciplinary Counsel.

During his tenure as a member of the College of Law’s full-time faculty Professor Lynk also held appointments as an Honors Faculty Fellow in Barrett, the Honors College; as Scholar-in-Residence at the ASU Center for the Study of Race and Democracy; as a Senior Fellow in the Lincoln Center for Applied Ethics (where his research focused on the tension between a lawyer’s ethical duties to clients, personal self-interest and responsibilities to the public); and as a Sustainability Scientist in the Julie Ann Wrigley Global Institute on Sustainability. In 2009 Professor Lynk delivered the Donohoe Forum lectures of the Arizona Ecumenical Council on the ethical issues presented by the Great Recession of 2008-09. He has held visiting professorships in law at Duke University and George Washington University. In 2014 Professor Lynk was a Visiting Fellow at Magdalene College, University of Cambridge, England, and a Visitor to the Faculty of Law at the University of Cambridge, where his research focused on a comparative analysis of the differences in theory and practice in how the legal profession is regulated in the United Kingdom and the United States. His public lecture to the Cambridge Faculty of Law was on the evolution of the doctrine of judicial review of legislation by the U.S. Supreme Court, from its discussion in The Federalist No. 78, to its initial application in Marbury v. Madison, to its use by the Supreme Court today. Professor Lynk has lectured widely on legal ethics and professional discipline, including to the U.S. Naval Justice School, the Ethics Summit of the National Attorneys General Training and Research Institute, the International Conference of Legal Regulators, the National Organization of Bar Counsel, the Bar Services Board in the United Kingdom and the Judicial Conference of the U. S. Court of Appeals for the Ninth Circuit. He participated in the 2005 Transatlantic Corporate Governance Dialogue and the 2015 Northwestern University Securities Regulation Institute.

From 2004 through 2010, Professor Lynk served at the behest of ASU President Michael Crow as ASU’s NCAA and Pac-10 (now Pac-12) Conference Faculty Athletics Representative, responsible for certifying the academic eligibility of ASU’s intercollegiate student-athletes. In 2005, President Crow tasked Professor Lynk with leading the university’s investigation into the shooting death of a graduate student by an undergraduate student-athlete. This resulted in the “Lynk Report,” which recommended numerous changes to improve campus safety at ASU that have since been implemented. In April 2007, in an unprecedented step, Professor Lynk and ASU Women’s Basketball Head Coach Charli Turner Thorne published a letter in the Arizona Republic which was co-signed by over 60 ASU faculty, coaches and administrators, in support of the Rutgers University Women’s Basketball team whose Black players had been insulted by a radio talk show host.

Professor Lynk served ASU as a member of President Crow’s Academic Council, as a member of two Provost’s Regents’ Professor Nomination Committees and, most recently, as a member of a President’s Professor Advisory Panel. In 2015 Professor Lynk was an advisor to University Senate President Helene Ossipov on the revisions to ASU’s academic policy ACD 402, which addresses personal relationships between faculty and students. In the College of Law, Professor Lynk served as the Dean’s Designee for student disciplinary matters, as a faculty advisor to numerous student organizations including the John P. Morris Black Law Students Association and the ASU Sports and Entertainment Law Journal, and initiated the creation of the ASU Corporate and Business Law Journal.

Professor Lynk’s teaching and research are informed by his professional service. In 1998 he was appointed by then Chief Justice of the United States William Rehnquist to the first of two terms on the Civil Rules Advisory Committee of the United States Judicial Conference and chaired its Discovery Rules Subcommittee.  In summer 2004 Professor Lynk was a Fellow on U.S. Senator John Kyl’s Subcommittee on Counterterrorism and Homeland Security of the U.S. Senate Judiciary Committee. Professor Lynk served as a member of the National Advisory Commission on Addiction Treatment of the National Center on Addiction and Substance Abuse at Columbia University and served pro bono as the legal ethics consultant to the District of Columbia Office of Attorney General. He is a member of the American Law Institute and served on its governing Council. In the American Bar Association (“ABA”), Professor Lynk served on the Board of Governors; chaired the ABA’s Section of Civil Rights and Social Justice (where he focused on the legal issues surrounding income inequality and poverty in the US); was a co-founder and initial chair of the Committee on Community Economic Development of the ABA’s Business Law Section; and chaired the Standing Committee on Ethics and Professional Responsibility (where he pushed to add discrimination and sexual harassment to the Model Rules of Professional Conduct as forms of professional misconduct), the Standing Committee on Professional Discipline (where he sought to add safeguards in the Model Judicial Code to protect the independence of elected judges) and the Special Committee on Bioethics and the Law (where he helped organize the 2001 conference at Tuskegee University on bioethics, minorities and the law). In 2015 Professor Lynk participated in the deliberations that resulted in, and was one of the fifteen signatories to, the Joint Statement on Eliminating Bias in the Criminal Justice System of the American Bar Association and the NAACP Legal Defense and Educational Fund, Inc. Professor Lynk served on the Board of Directors of the Sandra Day O’Connor Institute.

​Admitted to the Bar:

State of New York, since 1977
Commonwealth of Massachusetts, since 1979
District of Columbia, since 1982