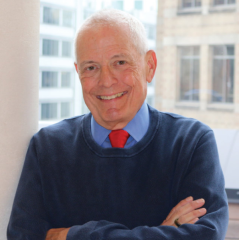 Ambassador O’Donnell leads the ASU course (Policy Design Studio POS 494 and Washington Internship POS 484) “Diplomacy in Action, the Embassy Country Team” in Washington, D.C. and is launching a Master of Arts in International Afffairs and Leadership.  He is a member of the ASU Leadership, Diplomacy and National Security Lab (LDNS Lab).  He is a Professor of Practice in the School of Politics and Global Studies (SPGS) The Barrett Honors Faculty.  He teaches courses in the World War II MA program and is on the Board of the Genocide Awareness Week (2022).

Ambassador O’Donnell retired from the career U.S. Foreign Service in 2007, after 33 years in Latin America, German-speaking Europe and other positions in Washington, D.C. He served in Germany, Austria, Panama, Colombia and Paraguay, as Charge, Deputy Chief of Mission, Consul General (Principal Officer), Economic Counselor and Commercial Attaché. In Washington D.C., he was a negotiating Ambassador concentrating on Holocaust issues; a Democratic Charter for the Americas and civil aviation rights. He was Executive Assistant to three Under Secretaries and Special Assistant, Policy Planning Staff.

O’Donnell served in the Active U.S. Army Reserve for 30 years with tours in Germany, Panama and the United States. A Foreign Area Officer in Europe and Latin America, as Colonel he commanded two Military Intelligence Detachments, supporting the Defense Intelligence Agency. He was commissioned in Military Intelligence at Fort Belvoir, Engineer Officer Candidate School and was airborne-qualified.

Since retirement from the State Department, he was Senior Strategy Advisor to the Assistant Secretary for Diplomatic Security (2014-2018), Senior Mentor/Advisor to the Afghanistan Government Minister of Counter Narcotics in Kabul (2011-2014) and State Department inspector (2010 – 2011) in the Middle East Regional Office of the Inspector General. From 2009 – 2011 he was Acting Principal Deputy Assistant Secretary in the Congressional Relations Bureau and earlier managed the State Department Liaison Office to the House of Representatives.

Ambassador O’Donnell is from Memphis, Tennessee, was graduated with a Bachelor of Arts in History from Southern Methodist University, received a Master of Arts in International Studies from American University and studied economics at the University of Heidelberg in Germany.

Awards:  Five U.S. State Department Superior Honor Awards; Legion of Merit, four Army Commendation Awards and other campaign and achievement awards, U.S. Army; and the Decoration of Honor for Services to Austria as U.S. Ambassador, awarded by the Foreign Minister, Government of Austria.