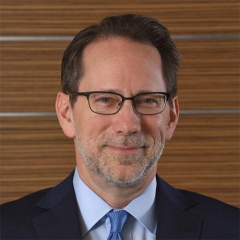 Ambassador Clint Williamson joined ASU in 2014 as Distinguished Professor of Practice in the Sandra Day O’Connor College of Law and Senior Director for Law and National Security at the McCain Institute for International Leadership. From 2011-2014, he served as Lead Prosecutor for the European Union Special Investigative Task Force, which is conducting a full and impartial criminal investigation into the allegations of war crimes and criminal activity contained in the Council of Europe (CoE) report of January 2011 by Senator Dick Marty, as well as other possible crimes connected to those allegations.

Immediately prior to this position, he was Special Expert to the Secretary-General of the United Nations at the Extraordinary Chambers in the Courts of Cambodia. The tribunal is charged with prosecuting senior leaders of the Khmer Rouge and those most responsible for mass crimes committed in Cambodia during the 1970s. From 2006-2009, Professor Williamson served as the United States Ambassador-at-Large for War Crimes Issues. From 2003-2006, he served in a number of capacities at the National Security Council, including Acting Special Assistant to the President and Senior Director for Relief, Stabilization, and Development, as well as Director for Stability Operations. During his tenure at the White House, he was instrumental in developing the proposal for the creation of a standing civilian U.S. Government post-conflict response capacity. While with the NSC, Williamson also served in Baghdad in 2003 as the first Senior Adviser to the Iraqi Ministry of Justice. In this capacity, he was responsible for re-instituting judicial operations and ministry functions in the aftermath of the U.S. invasion. From 2001-2002, he served as the director of the Department of Justice in the United Nations Mission in Kosovo (UNMIK), overseeing the justice and prison systems.

From 1994-2001, he worked as a Trial Attorney at the International Criminal Tribunal for the former Yugoslavia (ICTY) in The Hague. While at the ICTY, he supervised investigations and field operations in the Balkans, compiled indictments, and prosecuted cases at trial. Among the cases handled by Williamson were those against Slobodan Milosevic and the notorious paramilitary leader Zeljko Raznatovic, aka “Arkan,” as well as cases arising from the Yugoslav Army attacks on Vukovar and Dubrovnik in Croatia. Prior to joining the tribunal, Professor Williamson served as a Trial Attorney in the U.S. Department of Justice Organized Crime Section and as an Assistant District Attorney in New Orleans, Louisiana.