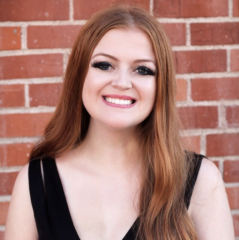 Alexis is currently enrolled as a Biology and Society PhD student with a concentration in Bioethics, Policy, and Law. She has focused her research interests broadly on science communication and the public dialogues that surround emerging and often controversial medical technologies.

Previous to the commencement of her doctoral studies, Alexis received both a B.S. and M.S. in Biology and Society from Arizona State University. She also obtained a certificate in the History and Philosophy of Science. As a student in Barrett, The Honors College, Alexis completed an undergraduate honor's thesis in which she performed a historical analysis of the technologies, research methods, and overall public engagement surrounding cervical cancer in the early twentieth century. She used that history to analyze its resulting impacts on modern dialogues surrounding the HPV vaccine and routine early detection screenings.

For her Master's thesis, Alexis investigated the overall feasibility of interspecies blastocyst complementation, which is a technology that may make it possible to grow human organs in non-human animals through the genetic manipulation of animal embryos. Specifically, she investigated its practicality as a means of reducing or eliminating the need for immunosuppressive therapies in modern organ transplantation, compared with historically similar efforts. After compiling the twentieth century discoveries critical to the understanding of rejection, tolerance, and tissue compatibility and comparing that with the present-day failure to eliminate the need for immunosuppression, she concluded that the scientific feasibility for the technology to eliminate the requirement for immunosuppression outweighs the ethical implications that have become standard in interspecies research.

As she continues with her studies, Alexis hopes to further investigate the origins of and solutions for the many ethical, legal, and policy restrictions associated with emerging technologies. Additionally, Alexis is interested broadly in the applications of consciousness and intelligence as means of giving agency to non-human technologies and animals. She presently works as a research assistant to Emma Frow on the NSF grant, "Synthetic cells that can learn without evolution."