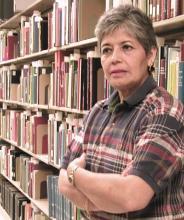 Dr. CHRISTINE MARIN, Professor Emeritus,   received her Ph.D. from Arizona State University. She is the Founder of the Chicano/a Research Collection and archives, Hayden Library, at ASU. She served the Archivist and Historian of the Chicano/a   Research Collection and the Arizona Collection in the Department of Archives & Special Collections, Hayden Library at ASU, for over 35 years. As Adjunct Faculty Associate at ASU for ten years, she taught courses on the history of Mexican Americans and Latinos for the Department of History; Transborder Studies; and Women & Gender Studies. Her books, journal articles & book reviews reflect her knowledge & expertise in various themes in 20th Century Mexican American & Southwest History. Dr. Marin is among the “founders” of ASU’s prestigious School of Transborder Studies.  Her dedication to the Arizona State University Chicano and Latino community is recognized by her colleagues, as the ASU Chicano/Latino Faculty & Staff Association has named an award in her honor, which is given yearly to a Chicano or Latino faculty or staff member for their outstanding service to ASU and its students. Dr. Marin was awarded the “Outstanding Faculty Award” by Arizona State University, College of Extended Education. She has served as a historical consultant on grants & media & film documentary projects & was presented with the Arizona Humanities  “Distinguished Scholar Award.” At Arizona State University, Dr. Marin is Emeritus Affiliate in the Department of Women and Gender Studies and Emeritus Faculty in the School of Transborder Studies. She is the recipient of the Victoria Foundation’s “Dr. Loui Olivas Distinguished Leadership in Higher Education Award, 2014”. The Victoria Foundation of Phoenix is an organization that honors and recognizes educators, business and community leaders who have made significant contributions for the betterment of Arizona. The Girl Scouts-Arizona Cactus-Pine Council awarded her their “Women and Young Women of Distinction Award” for her leadership and service for women in their communities. And the YWCA of Maricopa County awarded her their “Tribute To Women Award” & recognized her work in “empowering women & eliminating racism.” Dr. Marin served as a Member of the Board of Directors for the Arizona Humanities and currently serves as a member of the Board, Arizona Women's Hall of Fame, and serves as an Advisory Board Member for the Raul Castro Institute at Phoenix College, and as President of the Arizona Women’s Heritage Trail, an Arizona Centennial Legacy Project. She also serves on the Selection Committee for the Arizona Women’s Hall of Fame, the Arizona Women’s Heritage Trail, and for the Arizona Latina Trailblazers. The National Association for Chicana and Chicano Studies (NACCS) awarded Dr. Marin its “Community Award” in recognition of her commitment to the Latino community as an Archivist and Historian in the field of Chicano and Chicana Studies. In 2014, Dr. Marin was inducted into the Globe High School Hall of Fame, and recognized for her work as an Educator and for her academic scholarship and achievement. Her recent publications include three books of Latina stories called Latina Trailblazers: Stories of Courage, Hope and Determination”, published by the Raul Castro Institute at Phoenix College; and the book Latinos in Museums: a Heritage Reclaimed. Her recent journal articles include “’Get Rid of the Shacks’: West Live Oak Street Redevelopment in Miami, Arizona, 1946-1952”, published in the Journal of Arizona History, Summer, 2015 ;  “Courting Success and Realizing the American Dream: Arizona’s Mighty Miami High School Championship Basketball Team, 1951”, published in The International Journal of the History of Sport, June, 2009; “Community Organizing, and Civil Liberties: Clinton Jencks, Salt of the Earth, and Arizona Copper in the 1950s”, in the Mining History Journal;  and “LULAC and Veterans Organize for Civil Rights in Tempe and Phoenix, 1940-1947”, published by the Mexican American Research Center at the  Univ. of Arizona.  Dr. Marin’s article is titled: “Mexicano Miners, “Dual Wage” and the Pursuit of Wage Equality in Miami, Arizona”, Chapter Five, published in the anthology, “Mexican Workers and the Making of Arizona, ” edited by Gloria Holguin Cuadraz and Luís F.B. Plascencia and published in 2018 by the University of Arizona Press. Dr. Marin was also a Lead Historian/Researcher for the “Hispanic Historic Property Survey of Phoenix”, commissioned by the City of Phoenix, Historic Preservation Office. She is a member of the Pacific Coast Branch of the American Historical Association and a member of The Western Historical Association (WHA). Dr. Marin is a proud native of the copper mining community of Globe, Arizona. She is presently researching the history and stories of African American women in Globe and Miami, Arizona.