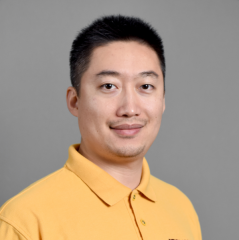 He joined the School of Computing, Informatics, and Decision Systems Engineering at Arizona State University in January 2015. He is directing the Parallel Systems and Computing Laboratory (PSCLab), and he is affiliated with the NSF Industry/University Cooperative Research Center for Embedded Systems. His current research interests are focused on algorithm, hardware, and system innovations for data analytics and information processing, with emphasis on bringing energy efficiency and data intelligence into a wide spectrum of today’s computing infrastructures, from data center server systems to wearable and Internet-of-things devices. He is a senior member of both IEEE and ACM. He is a member of the Digital Signal Processing Technical Committee and VLSI Systems & Applications Technical Committee of the IEEE Circuits and Systems Society.

Ren received the Broadcom Fellowship in 2012, the prestigious National Science Foundation (NSF) Faculty Early Career Development (CAREER) Award in 2017, the Google Faculty Research Award in 2018. He also received the Top 5 percent Best Teacher Awards from the Fulton Schools of Engineering at ASU in 2017, 2018, and 2019.