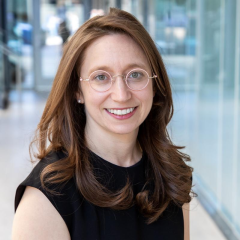 Erin Adele Scharff is an associate professor of law at the Sandra Day O’Connor College of Law.  She joined the faculty in 2014.  Previously, she was an acting assistant professor of tax law at New York University School of Law, where she served as an editor of the Tax Law Review.

Professor Scharff is the immediate past chair of the AALS Tax Section.

In addition to her academic work, Scharff is actively engaged in the Phoenix community and serves vice-chair of the board of the Phoenix Legal Action Network.  She is the mother to three rambunctious children.

Antidiscrimination in Employment: The Simple, the Complex, and the Paradoxical, in The Law and Economics of Labor and Employment Law (Cynthia Estlund and Michael L. Wachter, eds. 2013) (with Samuel Issacharoff)