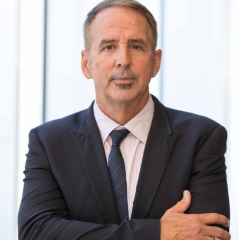 Dr. Thom Reilly is currently a professor in the School of Public Affairs and Co-Director, Center for an Indepedent and Sustianable Democracy at Arizona State University (ASU).

He is the former Chancellor of the Nevada System of Higher Education (NSHE) where he served as chief executive officer and oversaw, under the authority of an elected board of regents, a complex system that includes R-1 research universities, four-year undergraduate institutions, a research institute and community colleges. During his tenure, he has accumulated an impressive record on multiple measurable dimensions of success centered on increased accessibility, student success and expanded workforce training and education.

Prior to his appointment, he served as director of the Morrison Institute for Public Policy at Arizona State University.

He previously served as County Manager for Clark County (the Las Vegas Valley), where he provided both regional and municipal-type services. As CEO, he was responsible for the fiscal management of the County’s $5.8 billion budget and administrative oversight of close to 12,000 employees. During his tenure he was known for innovative governance practices including instituting increased transparency in the budgeting process, creating a host of citizen involvement/engagement activities; establishing a pay-for performance compensation system for employees;  and championing regional governance efforts.

Reilly has extensive experience in the private sector, serving as managing principal of The Reilly Group, a management consulting firm and as Executive Director for the Caesars Foundation. He has also held senior administrative positions with the State of Nevada overseeing the statewide child welfare system.

Reilly has authored numerous published works on public pay and benefits, governance, and child welfare. He and his work have appeared on NPR's "Here and Now," PBS NewsHour, CNN Money, ABC World News, “This Week with George Stephanopoulos”, Fox Business News, and in the Wall Street Journal, The Guardian, Law 360, Governing, The Fulcrim, Businessweek and The Associated Press.

In 2012, his first book, Rethinking Public Sector Compensation: What Ever Happened To The Public Interest? was by published by M.E. Sharpe Publishing, Inc. / Taylor & Francis Group. In 2016, Lexington Books: An Imprint of The Rowan Littlefield Group published his second book, The Failure of Governance in Bell, California: Big Time Corruption in a Small Town. The Independent Voter (forthcoming 2022) with co-authors Jacqueline Salit and Omar Ali is being published by Routledge Press (Francis & Taylor Group).

Reilly currently is a Fellow of the National Academy of Public Administration, professor emeritus at San Diego State University; is on the Editorial Board for the academic journal Public Personnel Management; serves on the Board of Directors for Global Outreach Doctors, an international NGO; and with his partner Jim Moore, has served as host parents for the international high school exchange program, AFS since 2005.

Salit, J. & Reilly, T (2020). Can the Independent Voter Save American Democracy? In  Orr, D; Becker, B.; Gumbel, A; and Kuttner, B. (editors).  Democracy Unchained: How to Rebuild Government for the People. New Press Publishing.

See CV under Bio or go to thomreillypublications.com for a complete listing of publications