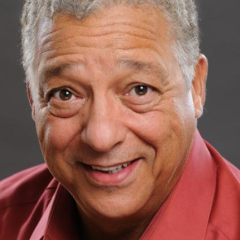 Charles St. Clair is a graduate of the Fairmount Center for Creative and Performing Arts is an interdisciplinary artist with more than 500 major productions in theatre, film and video. He is a three-time recipient of the Fulbright-Hays Group Project Abroad grant for cultural study in Ghana, West Africa and a five time ariZona award-winning director. Among his film and video credits are "With These Hands," an Emmy Award-winning special for NBC; "Beauty and the Beast," a three-time Emmy Award-winning special for PBS, which he co-authored, produced and directed. Mr. St. Clair founded the Fairmount Theatre of the Deaf (F.T.D.), as artistic director, and under his direction, F.T.D. toured the United States and Canada as well as appearing twice at New York's Lincoln Center Theatre Festival.

A technical director and production manager for more than 300 productions and events including the Closing Ceremonies of the Winter Special Olympics, the Orange and Sun Bowl half time productions and tours to Europe, China, India and the Middle East. Mr. St. Clair is presently a professor of practice on the faculty of Arizona State University at the West campus where he teaches acting, directing and serves as the technical director for the School of Humanities Arts and Cultural Studies (SHArCS) in the New College of Interdisciplinary Arts and Sciences.