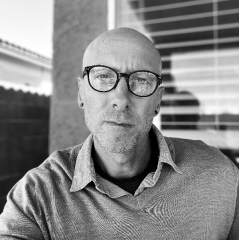 Terry Shoemaker is an Americanist scholar focusing on religious change in contemporary life, particularly as it pertains to evangelicalism, exvangelicals, and evangelical adjacent groups. This includes the ways that religion and religious people adapt, convert, deconvert, reform, and abandon aspects of their religiosity or spirituality. Additionally, he is interested in studying sports in the United States through the lens of religious studies theories and methods. His work is featured at numerous sites like The Conversation, Zócalo Public Square, and Religion Dispatches.  These interests lead Terry into various classes at ASU on the topics ofReligion and Popular Culture, Religion and Sports, and Spirituality in America.

His first edited volume, The Prophetic Dimension of Sport, was published in 2018 and a second edited volume regarding the future of progressive Christianity and the Millennial generation with Wifp & Stock Publishers. Terry currently serves as vice-president of the Society for the Future of Higher Education (SFHE) and on the Religion, Sport, and Play American Academy of Religion steering committee.

Transforming Religiosity in the United States