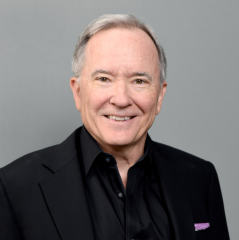 During Professor Hill’s 39 years as a collegiate conducting teacher, he taught scores of undergraduate and graduate conducting students and served as the primary mentor for 53 wind band conducting majors, 8 who are serving as conductors of US Armed Forces’ ensembles and other professional groups, and 42 who won university teaching positions.

Gary W. Hill is one of the most sought after guest conductors and clinicians in the instrumental music education field. As a conductor, appearances in more than a dozen countries and throughout the United States have included performances with myriad high school honor bands, numerous college and university wind bands and orchestras, many professional ensembles, at the Midwest International Band and Orchestra Clinic, and at World Association of Symphonic Bands and Ensembles' conferences As a clinician, Hill has presented hundreds of workshops on conducting and rehearsal technique for music teachers of all levels and has worked with thousands of bands and orchestras and their teachers. Professor Hill is currently a Conn-Selmer Educational Clinician.

Hill remains passionately involved with research concerning the exploration of biochemical reactions spawned by the musical process, the art and craft of conducting, and the past, present, and future of instrumental music in schools. He is the author or co-author of numerous articles published in music trade journals (CBDNA Journal, WASBE Journal, Bands of America, National Association of Schools of Music, AMEA Journal, etc.) and in scientific journals, proceedings, and books, including: the Acoustical Society of America; The Oxford Handbook of Making Music and Leisure; and in the Journal Hormones and Behavior.

Professor Hill is a member of many professional organizations, including the American Bandmasters Association and the College Band Directors National Association, for which he hosted the “Fiftieth Anniversary National Conference” (1991), co-hosted the 2019 biennial national conference, as well as the joint conferences of the North Central and Southwestern Divisions in conjunction with The Society for American Music (1998), served as president of the Southwestern Division (1989-91), and as national president (2003-05).

The biochemical reactions to the music making process.

The ongoing evolution of ensembles in educational institutions.

5. Presentation and website document for the Midwest Clinic: Losing Control and Gaining Engagement: Tips and Techniques Inspired by Science for Improving Motivation and Performance in Large Ensembles."

Recipient of the 2014 "Distinguished Service to Music" award from the Kappa Kappa Psi National Band Fraternity.

Past President of the College Band Directors National Association (2003-2005)