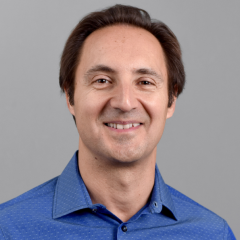 Marco Santello is a professor and director of the School of Biological and Health Systems Engineering in the Ira A. Fulton School of Engineering at Arizona State University. Santello is also director of the Neural Control of Movement Laboratory. Work in this laboratory focuses on understanding the control of complex movements. What appears to be an effortless movement is in fact the final product of complex spatial and temporal interactions between the central nervous system and the muscular system. Given the complexity of these interactions, a number of approaches has been used to study motor control, ranging from measuring the electrical activity of muscles (EMG) to quantifying motion and forces during the execution of single and multi-joint movements.

For the past few years, Santello has been working on the control of the hand as this system is characterized by a large number of elements or degrees of freedom (i.e., muscles, joints). Hence, the hand's motor system is particularly useful to address questions related to neural strategies and mechanisms underlying the control of complex movements, i.e., coordination of hand muscles, motion and forces of multiple digits. Current work in the Neural Control of Movement Laboratory focuses on basic and applied motor control problems including (a) control of kinematics, kinetics and EMG of hand muscles during object grasping and manipulation, (b) investigation of electrical stimulation for sensory substitution/rehabilitation, (c) mathematical modeling of motor unit behavior, and (d) assessment of effects of musculoskeletal and neurological diseases on hand control finalized to the development of sensorimotor rehabilitation intervention.