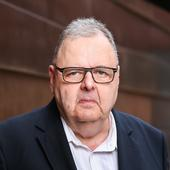 Peter Lehman is the director of the Center for Film, Media and Popular Culture at Arizona State University. He is the author of "Running Scared: Masculinity and the Representation of the Male Body," "New Edition" and "Roy Orbison: The Invention of an Alternative Rock Masculinity" and coauthor of "Thinking about Movies: Watching Questioning, Enjoying, Third Edition;" "Blake Edwards;" "Returning to the Scene, Blake Edwards, Vol. 2.;" and "Authorship and Narrative in the Cinema." He is editor of "Pornography: Film and Culture," "Defining Cinema," and "Close Viewings: An Anthology of New Film Criticism" and coeditor of "The Searchers: Essays and Reflections on John Ford's Classic Western." He is a former president of the Society for Film and Media Studies.