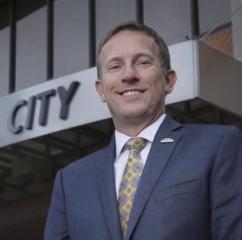 Scott Somers is a professor of practice with the College of Public Service and Community Solutions at Arizona State University, bringing over two decades of public safety and emergency management experience. He also serves as a senior fellow with the Goldwater Center for Cyber and Homeland Security. Previously, he held positions with the Phoenix Fire Department and FEMA Urban Search and Rescue AZ-TF-1 team. In fact, Somers was one of 80 AZ-TF-1 members who conducted search and rescue missions during Hurricane Harvey and Hurricane Irma in August and September 2017.

Somers has also held numerous elected and appointed leadership roles, most recently as a city council member in Mesa, Arizona. Additionally, he has served as chair of the National League of Cities Public Safety and Crime Prevention, on the National EMS Advisory Council, National Homeland Security Consortium and the FirstNet PSAC & SAFECOM Executive Committee.