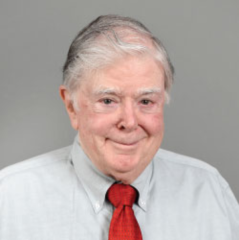 Sheldon Simon came to Arizona State University in 1975 to chair the Political Science Department.  Subsequently, he served as director of fhe Center for Asian Studies at ASU. He has also held faculty appointments at the universities of Hawaii, British Columbia, and Kentucky as well as at George Washington University, Carleton University (Ottawa), the Monterey Institute of International Studies, and the American Graduate School of International Management. He has received research grants from the National Bureau of Asian Research, the U.S. Institute of Peace, the Hiroshima Peace Institute, and the Earhart Foundation. Currently, he serves on five professional journal editorial boards. Professor Simon is the author or editor of 10 books, most recently co-edited volumes: "China, the United States, and Southeast Asia: Contending Perspectives on Politics, Security, and Economics" (Routledge, 2008) and "Religion and Conflict in South and Southeast Asia: Disrupting Violence" (Routledge, 2007). He is also the author of approximately 200 scholarly articles and book chapters in such journals as Pacific Affairs, The Pacific Review, Asian Survey, Asian Affairs, International Politics, NBR Analysis, Comparative Connections: An E-Journal of East Asian Bilateral Relations, Contemporary Southeast Asia, Current History, The Third World Quarterly, The Australian Jourrnal of International Affairs,The Korean Journal of Defense Analysis,The Journal of East Asian Affairs, and The Indonesian Quarterly. Simon is an academic associate of the National Intelligence Council and a consultant to the U.S. Departments of State and Defense on Asian security issues. For the 2008-09 academic year, he held the Visiting Asia Mentor Professorship at The U.S. Naval War College. In 2010, Professor Simon delivered a series of lectures on behalf of the U.S. embassy in Indonesia on US strategic interests in Southeast Asia and in May 2013, he was a member of a U.S. embassy traveling symposium in Japan on the South China Sea conflicts and its implications for the U.S.-Japan alliance.