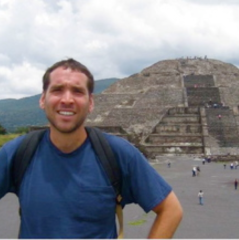 Christopher Morehart is an environmental anthropologist, an ethnobotanist/paleoethnobotanist, and an archaeologist. One of the best things about anthropology and archaeology is the ability and training to exhibit this kind of flexible pragmatism. Indeed, this characteristic is what drew him to anthropology and is what keeps him there. These interests have led Morehart to tackle a number of social questions at different times and places. Regionally, the vast majority of his work as an anthropological archaeologist occurs in the region scholars call (somewhat arbitrarily) Mesoamerica. Sub-regionally, he has conducted research in the Maya Lowlands of Belize, Yucatan, and Guatemala, and has been working intensively in the Basin of Mexico over the past several years. Conceptually, much of his research centers on questions of inequality and ideology. Morehart has studied the impact of state power on agrarian landscapes, the connection between politics and environmental sustainability, the integration of ritual with politics, community formation in the wake of imperial collapse, the effect of economic circumstances on gender relations, the role of archaeological narratives in contemporary identity politics, and many other important anthropological issues.

He continues to work as a paleoethnobotanist on archaeological projects in Yucatan, Mexico; Belize, Guatemala; and the southeast United States. Creating a Mesoamerican ethnobotanical database (based on published literature) is a project Morehart has been working on since 2000. However, his primary research exists in central Mexico, namely the Northern Basin of Mexico. He was the director of the Proyecto Chinampero Xaltocan, an archaeological project that reconstructed the raised field agricultural landscape surrounding the pre-Aztec city state of Xaltocan. This project gave Morehart the opportunity to invest in an agricultural landscape the same amount of time and energy archaeologists typically give to residential sites. In so doing, he realized the importance of these spaces for addressing central problems in the archaeology of political economy as well as key limitations in many of our models that explain the relationship between farmers and politics. Moreover, this work opened his eyes to agricultural landscapes as active, lived spaces—spaces where past people spent so much of their daily lives (but spaces that seem to be relegated archaeologically to a handful of surface collections, trenches or test pits, if that). Using satellite imagery and aerial photos (managed in a GIS) with this intensive, on the ground fieldwork, allowed him to document one of the largest pre-Aztec chinampa systems.

As an environmental anthropologist, however, this work is only one aspect of longer term research on the historical ecology of the northern Basin of Mexico—a project with questions whose answers are as much about the present as they are about the past. Fundamentally, this project stresses the political ecological dimension of historical ecology and seeks to understand the impact of political change on how people interacted with the environment. Archaeologically, the investigators are working at sites that date from the Formative period to the Colonial and more recent historic periods in the northern Basin of Mexico. The kinds of sites they are studying include villages and residences, ritual shrines, specialized lake-shore sites (perhaps trading ports?), and canal and terrace systems. One of this project's great challenges is integrating data that exist at very different spatial and temporal scales, such as intensive excavation data, survey data, aerial photos and satellite images, historic texts and maps, ethnographic data and oral histories, and paleoecological records. But this challenge makes this project more exciting and significant. They will produce a historical ecology and biography of landscape that is meaningful both for scientists and historians and for living residents.

New Book: "Surplus: The Politics of Production and the Strategies of Everyday Life," edited by Christopher Morehart and Kristin De Lucia

Looking to the Future to Examine the Past